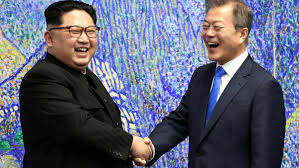 In 2013 we joined with 22,000 Chinese, Koreans and Japanese singing a song of unity for the Koreas. In the middle of worship, the Korean worship leader broke down in tears. She could not continue. The leadership recognised the burden of the Lord, it was not just an emotional response.

The next day we interceded for unity on the Koreas. For almost three hours we cried out to God until the burden lifted and we had the assurance, unification will come. Imagine the surprise when events on the Koreas changed so rapidly. Suddenly, in early 2018 Kim Jong-un said North Korea wants unification. Then a team from the North joined the Olympics with a combined team representing the Koreas in ice hockey.

Then on April 27th Kim Jong-un walked across the border into South Korea. It was obvious the relationship between Moon and Kim was friendly. The whole meeting and discussions were filled with symbolism. One reporter said, “South Koreans were weeping when they saw the two leaders together because they were so friendly”. I was amazed!

However God knows the heart of man. Hank Kunneman prophesied, overtures at the Olympics are hiding Kim’s real intention and the enemy intends to bring war on the peninsula. While Kim Jong-un was talking peace, satellite images showed a new nuclear reactor being started up. Tell-tale signs of ice melting around the reactors confirmed Hank’s prophecy!

Kim Jong-un and his father have deceived the nations for years. Most promises they have made were never kept yet they got millions of dollars in aid. Now North Korea is in deep financial trouble after Pres. Trump imposed severe sanctions. Trump then applied great pressure, on countries trading with the North, to comply with the sanctions.

It is estimated North Korea has only a few months of petrol for its army then they will run out! Kim Jong-un is being brought to his knees. He may try to deceive everyone by asking for concessions before denuclearising the peninsular. Kim Jong-un has a purpose and the overtures may be deceiving but God also has a purpose.

God has spoken to many prophets: Hank Kunneman, Cindy Jacobs, Dutch Sheets, Charles Shamp and Dawn Hill. God has said he is going to answer the cries of the persecuted in North Korea and set them free. God also wants unification which will lead to revival in the North. Now that is big!

Amazingly, God has said through Prophet Shamp, “I(Charles Shamp) told Kim of his destiny and purpose, not as a dictator but a liberator”. Kim Jong-un, by biblical standards is an evil man but he will be the very person bringing liberty to the North! This is hard to imagine but sometimes, God in his great mercy will use the abuser to bring freedom. This is the case with the Koreas but the Church must be praying. God is not going to move sovereignly. The enemy is coming against God’s will and wants to bring war not freedom, so we must be willing to stand in the gap. The meeting between Pres. Trump and Kim Jong-un is key to unification and to setting North Korea free!

Intercessors, now is the time to be praying for the US-Koreas meetings. Leaders and their staff are making decisions now, so when Kim Jong-un and Pres. Trump meet, they will sign what has already been agreed upon. Let’s not miss this opportunity to bring change to the Koreas.

If you are a young Christian reading this, then this is not for you. The Holy Spirit has warned intercessors, there will be serious spiritual attacks against those interceding. So intercessors keep on your armour as you stand in the gap.

1. War will not happen on the Koreas

2. Bind the spirit of pride in Kim and his sister, and that they will humble themselves

3. Kim and his sister will repent and believe in Christ

4. That Kim will grasp his destiny as a liberator not a dictator

5. Command the devil to get behind Pres. Trump and Kim so they can meet and have a successful meeting bringing unification to the Koreas

6. For Pres. Trump, not be deceived by Kim Jong-un but maintain sanctions until un-reversible changes are made to the North’s nuclear arsenal and program

7. Be strong in faith and declare out loud, “Unification on the Koreas!”

8. God’s covering and protection over the intercessors

9. Intercessors be strong and courageous, and fight for the Koreas

10. Pray revival will come to North Korea as God promised
Standing Together

Advertisements on this page do not necessarily reflect our views

US trying to resume stalled negotiations with NK

My guidance, Mike Pompeo is doing a great job negotiating with NK over it’s nuclear weapons. […]

It is time for the Church of America to rise up and bring in the harvest. […]

The Fire is Coming

I hope you are seeking the Lord during this important time. God has promised to burn […]